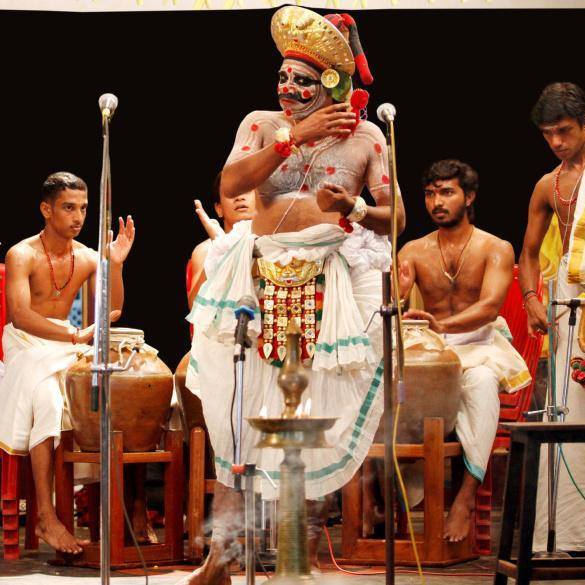 India has shown super forms of art like the Turing’s machine which is an abstract instrument capable of constructing any logic. From dance to martial art to theatre to caricature to graffiti, it has come up with anything imaginable and beyond proclaiming strength, vigor, outrightness. And from all regions, art forms have volatilized to create ripple and amazement through and through out. Chakyar Koothu speaks of itself as one such form which has stood the test of time, just transducing to different forms as it evolved. Etymologically, it belongs to Kerala. Koothu meaning dance. Chakyar is the priestly caste under the Ambalavasi community of Hindus in Kerala.

Originally it began as a dance form of worshiping or related to worship as any form in some sense does. Although Chakyar Koothu dance, it finds more relevance as a theatrical medium. And a one man theatre usually called a monologue. To voice out epics from the great tales or documentation in the likes of Mahabharata, Ramayana was the purpose. But soon it became a medium to showcase contemporary socio-cultural-political protest. And in such a form which obeys the law of minimum embanking on the expressionism of the actor. Usage of mask is a characteristic feature to reflect out various shades of the social animal. Snake hood to represent Anantha, the thousand headed serpent. Body smeared in sandalwood. Thick mustache representing the patriarchal. And the father who made this form public not confining it within the temple premises or within the cast structure was the great Padma Shri Mani Madhava Chakyar unifying the form with the rest.