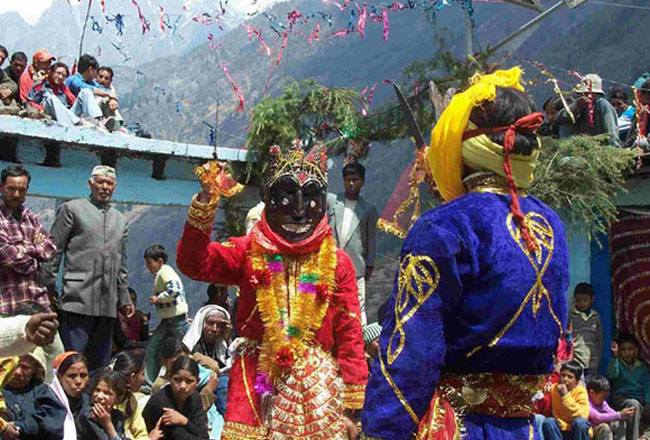 Bhotiya Dance is a ritual conducted by the Bhotiya or the Bhot ethnic group. This ethnic group is known for following Hinduism, Buddhism, and Bon religion; and the official language spoken by them are Ladakhi, Sherpa, Standard Tibetan and other Tibetan languages, Nepali and Hindi. Bhotiya tribe or ethnic group is located in the Trans-Himalayan region, which is connected with Uttarakhand and the tribe group was named in the Tibetan language.

According to the locals and legends, it is said that the people who have passed away in the Bhotiya region, their souls get trapped within the body of the goats and sheep present in the town. Performing this dance helps in liberating the souls of the Bhotiya tribe. Typical traditional dance like "Dhurang" and "Dhuring" are the dance forms of the local Bhotiya tribes in Uttarakhand and is performed during the death ceremonies and funerals of the family member who have passed away. This dance formation is very similar to that of the dance styles present amongst the tribes in Himachal Pradesh and in Nagaland.