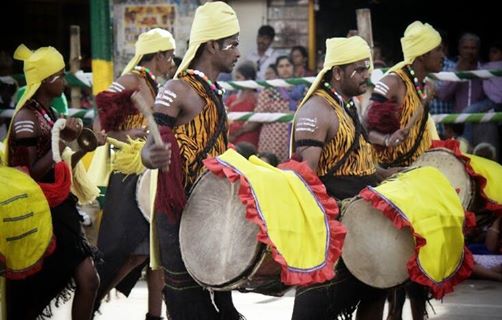 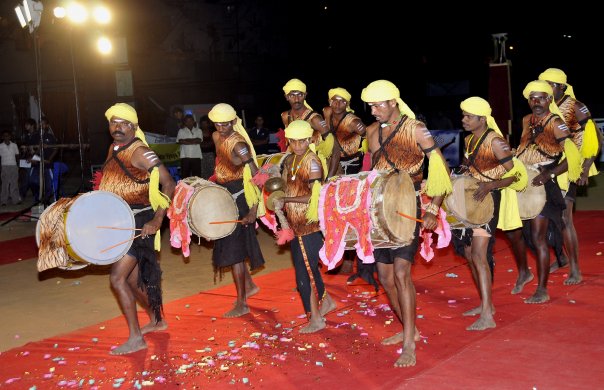 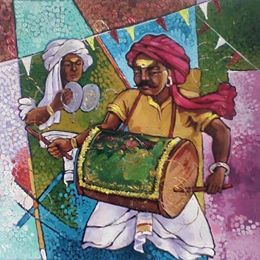 Dollu Kunitha is a traditional dance form in Karnataka. It is also known as the drum dance of Karnataka. The name Dollu Kunitha is derived from the traditional instrument Dollu which is present in all Beereshwara temples in Karnataka and the theme of the dance is based on Lord Beereshwara. While an offering is made by the Kuruba Gowdas to Lord Beereshwara, Dollu is continuously beaten throughout the offering. During the performance the story of Dolla-Asura, the demon and Lord Shiva is told. When the demon swallows lord Shiva, he starts growing big and the demon couldn't stand the pain hence Lord Shiva tore apart the demon, Dolla-Asura, and came out of the body. Then Lord Shiva used the demon's skin to make the drums and this drum was given to the devotees of Lord Shiva.

This performance is accompanied by a group of singers who sing this story to the audience in a particular rhythm. Since this story or legend has been followed by various generations and was present since a community of Kuruba Gowdas were formed, it has been considered as a powerful ritualistic performance or ceremony in Karnataka during the festival season. And the people who enact the performance wear a dhoti while dancing and sing out loud while dancing. Other traditional instruments are also used in the dance performance to create an orchestra feeling which supports the vibration of Dollu. All the traditional songs were created in such a way that it enhances the sound of Dollu during a performance making it more enjoyable for the audience.