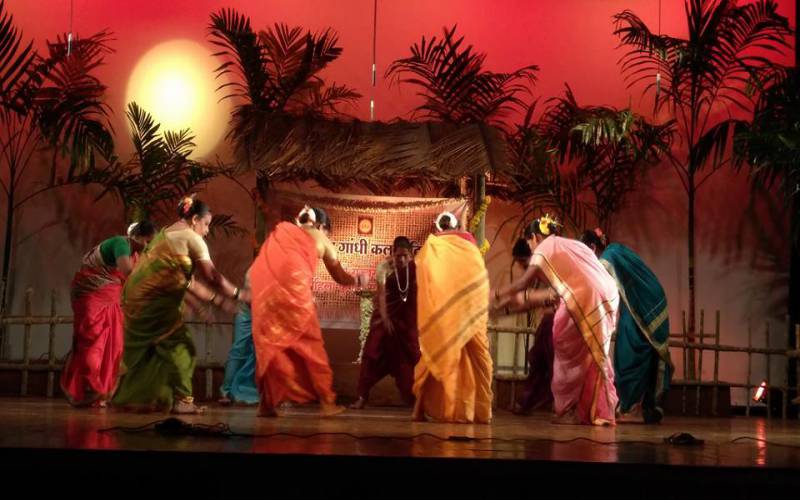 Fugdi is a traditional folk dance of Goa, where the Goan women from the Konkan region perform this dance form during religious festivals like Vrata, Ganesh Chaturthi and other Hindu festivals. This traditional dance form is usually performed during Bhaadrapa month, where Goan women get a chance to break-out from their regular everyday chores and have fun. This type of dance form originated from the primeval tradition of the Goan culture and the Dhangar women, also known as the shepherd community in Goa perform this type of dance form. This dance is performed in front of Goddess Mahalakshmi during the Vrata festival.

This is the only traditional dance form in Goa which doesn't require any sort of instrumental support to perform the dance. In this dance form, women of the shepherd community thank the Hindu gods in the starting of their performance and dance slowly while singing out loud and the rhythm of the dance increases every second. The climax of the dance and the speed of the hands & leg movement leads to the women breathing out loud with the sound 'Foo', hence the name Foogdi or Fugdi were given to this tradition.

The Fugdi dance is also performed with women carrying coconuts in their hands, which represent their break from fetching water from wells and other water holes from a long distance town or village. Rahat, Zimma, Girki, Cycle, Bus Fugdi, Karvar, Ghuma, Kombda, and Pakhwa are the sub-forms of the Fugdi dance and are considered as the most popular Fugudi dance in the respective villages.