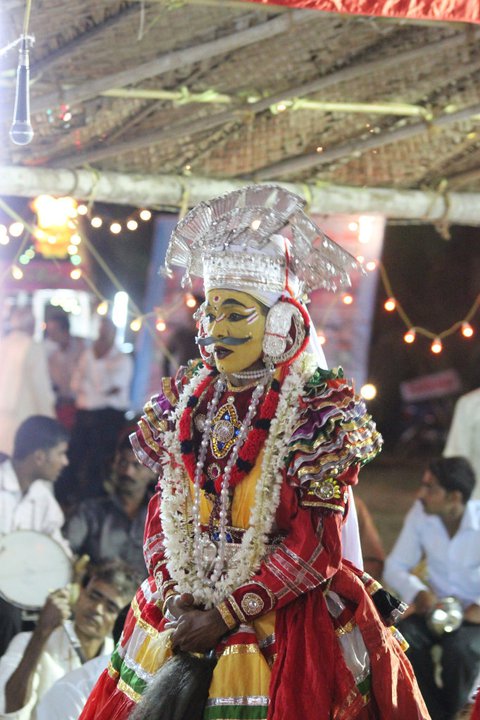 Garadi dance is the most popular folk dance form in Puducherry, a union territory in the southern part of India. It originated in Puducherry unlike other popular tribal and folk dance prevalent in the region. The Garadi dance has its link to the Hindu epic Ramayana and is believed to be originated from that time. As per the legends of Ramayana, male dancers make movements and postures of that of a monkey. The monkey dance is performed in special occasions and festivals which are celebrated Puducherry. The Garadi dance is exclusively performed during the Car Festival held at the Villanur Temple in Puducherry with pomp and grandeur dedicating to Lord Vishnu. The performance lasts for five to eight hours continuously and may even go on many nights in a row.

According to popular belief, this ceremonial folk dance was performed during the era of Ramayana. The Garadi dance was performed by the monkey army of Sugreev, the monkey king to celebrate the joyous event of Lord Rama’s safe return with his wife Sita by defeating the demon king, Ravana. To commemorate the event, Garadi dancers guise themselves as monkey and make similar postures and gestures like the animal. They hold sticks in their hands while dancing with flags attached to it on top. They wear ten iron rings known as ‘Anjali’ on each leg and perform with intricate and acrobatic monkey movements accompanied by two large drums known as ‘Ramadolus’. A spectacular ambience is created with the rhythm of the ‘Ramadolus’ along with the chimming tune of the Anjali and the songs of the local vocal singers.