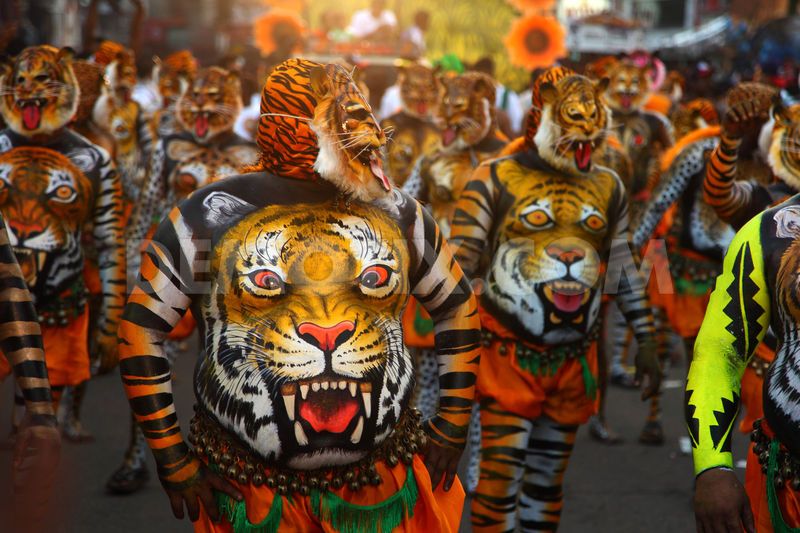 Tamil Nadu is home to many popular traditional folk dance forms. One such is Puliyattam folk dance which means ‘tiger dance’. Dating back many centuries ago, it is an ancient form of dance. This incredible style of dancing displays exotic costumes and vibrant dancing gestures resembling the fierce and graceful movements of a tiger. The Puliyattam dance is unique in impersonating the majestic predator. It is mainly performed during the harvest festival or other religious ceremonies in the southern part of India. It is also quite popular in the neighbouring states of Kerala and Karnataka.

Puliyattam dance form is performed in a troupe of six performers. Each one of them wears loin clothes which are painted by trained artisans with vivacious yellow and black colours and wears a head gear which resembles the viciousness of the tiger. The ferocious fangs and paws with claws and a tail make them the perfect replica of the savage beast. The music forms an integral part in the performance. The wildly played thunderous roar of the drums and other musical instruments helps the performers to implement the swift and unpredictable movement of the ‘puli’ or tiger. The performance starts in a slow pace gradually gaining the speed with fast movements and lofty jumps and pouncing like the movement of a tiger. The elegance of Puliyattam folk dance is displayed through the graceful and majestic walk and leaps of the tiger in the various steps of this dance form. To make it look more realistic, a goat is tied to a nearby pole while the dancers enact the pouncing movements with proficiency.