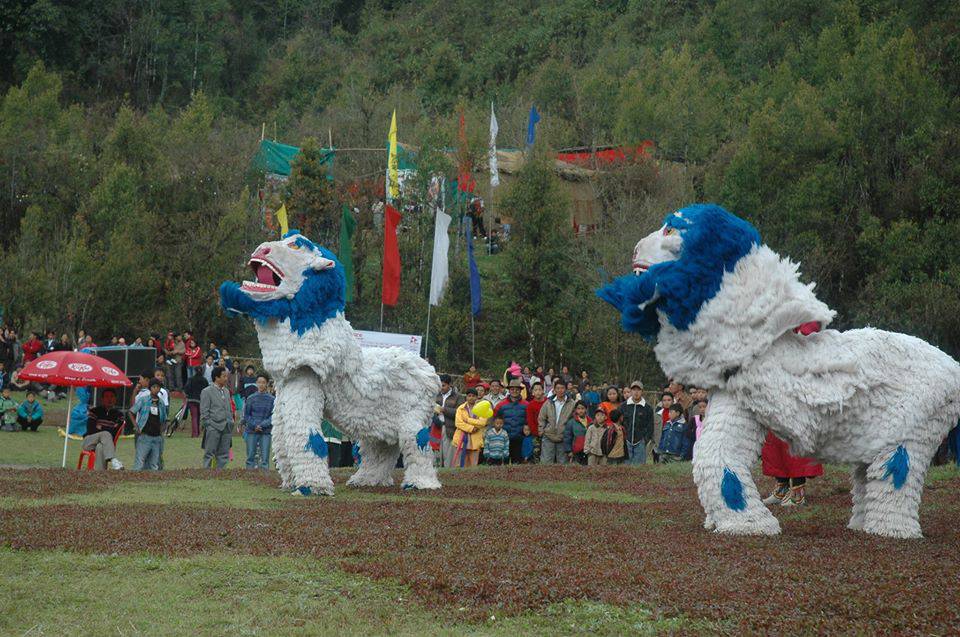 Singhi Chham Dance is a folk dance originating from Sikkim, a state in India. This type of dance form is said to be performed by the Bhutia people wearing a snow lion costume. The folk dance is said to be introduced in the 18th century by Chador Namgyal, the third Chogyal of Sikkim, for the Panglapsool festival. The snow lion costume showcases the white beauty of the lion with a bluish mane which represents the legendary snow lion of Sikkim.

During the Panglapsool festival, the Bhutia men dress up as the snow lion in pairs and 2 to 4 snow lions perform the dance while a single drummer plays the beats for the people to dance along with. Snow lion is a legendary creature that is said to be seen in the Kangchen Junga Mountain, also known as Khang-Chen Dzong Pa locally. The peaks of the Kangchen Junga is the third hight peak in the world, the mountains and hillocks formed by Kangchen Junga makes it look like there is a boundary surrounding the mountain, therefore this peak and the mountain is considered as a sacred place for the people of Sikkim who perform the dance to honour KangchenJunga.

There is another legend behind the Singhi Chham Dance. It is said that Kangchen Junga is personified into a five-faced god as there are five peaks within the Kangchen Junga Mountain. Kangchen Junga was also known for riding a white snow lion while protecting the people. Therefore the snow lion became the mascot of the state and the people consider it as a supernatural creature.