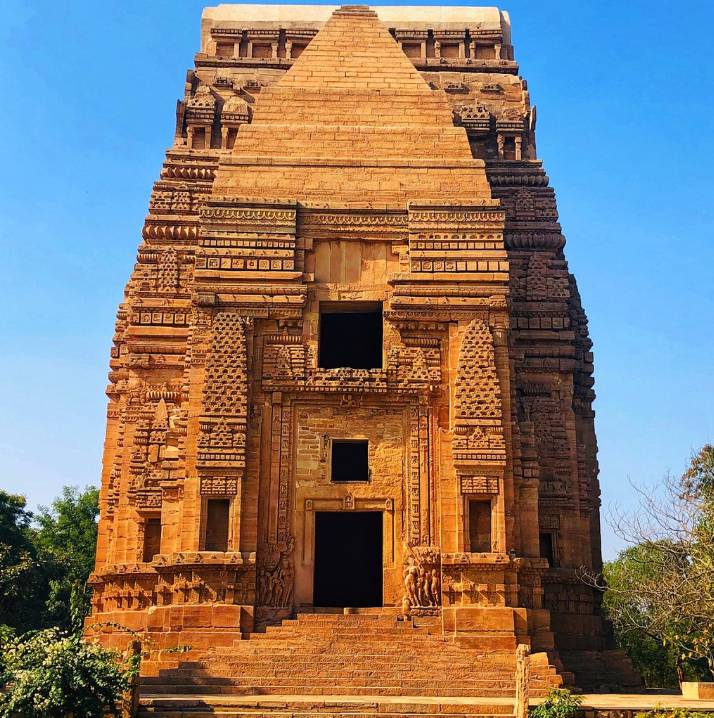 Teli Ka Mandir is located inside the fort of Gwalior. It is believed to be built during the 8th to 9th century A.D., although there are still controversies regarding its actual origin. It is situated on a high point which makes it visible from different location within the fort. The temple is dedicated to various Hindu Gods and Goddess which includes Lord Vishnu, Lord Shiva and Lord Matrikas. The origin of the temple can be cited from the palaeography, architectural design, art style and from the inscriptions from the temple premises. Different historians and experts are of various opinions regarding its time of construction. The temple is built in Pratihara-Gopagiri style of North Indian architecture which resembles the massive structure of the Dravidian Gopuram.

Teli Ka Mandir has an unusual rectangular santum sitting on jagati platform. Above the 35m ornate doorway, there is a decorative relief of Garuda, the ride of Lord Vishnu. Several inscriptions found in the entrance and panels suggest that the temple was under the influence of Shaiva, Shakta and Vaishnava tradition at different periods of time. Influence of Buddhist architecture can also be found inside the temple complex. Marks of extensive damage and change depict its history of being invaded by Muslim plunderers which was later restored by the Hindu Maratha rulers to quite an extent. Major Keith, an officer of the Royal Scots Regiment initiated repair work of the ancient temple in 1881 to 1883 from its ruins.