Girnar is the present day abbreviated version of the original Girinagar which roughly translates to the city on a hill. Locally, it is extremely sacred and revered for religious reasons and in spiritual circles is known as Revatak Parvata or a group of mountains. The Girnar Mountains are located in the Junagadh district of the Indian state of Gujarat and is considered a pilgrimage destination that is revered highly by both Jains and Hindus. Tirtha is the Hindu terminology used to denote pilgrimage tours and Girnar is one of the 5 main pilgrimage destinations or tirthasthanas for those who aspire for monkhood under the Jain religious principles.

The Girnar hills is a famous pilgrimage spot of the temple of Guru Dattatreya who is considered to be the human manifestation of the Hindu trinity of Gods, Bramha Vishnu & Maheshwara. This temple is the landmark for the peak Guru Shikhar on the Girnar hill and is surrounded on all sides by thick vegetation and wildlife.

The Guru Dattatreya temple is located atop a hill which is an 10,000 step stair travel for the pilgrims from the Girnar hill below. The climb to the summit to visit Dattatreya temple is very challenging and quite steep and truly tests the sincerity and devotion of the aspiring pilgrim or believer. The Dattatreya temple is a sanctum of faith for many mendicants, hermits and people of religious belief and they can be seen flocking around its premises or conducting rituals. The shrine of Dattatreya is indeed very ancient and is a feeble reminder of the presence of this divine being in human form as it lies in utter neglect and tatters.

How many steps between ambaji and dattatray? 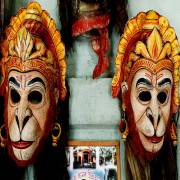 Ambaji temple located at 5,200 steps and further to reach guru dattatreya it is located at 4,800 steps, so total 10,000 steps from starting points.

How many step from ropwayend to dattatray temple?

How much time does it take to reach Shree Dattatreya Temple from Amba Mata Mandir
And come back at the ropeway station?