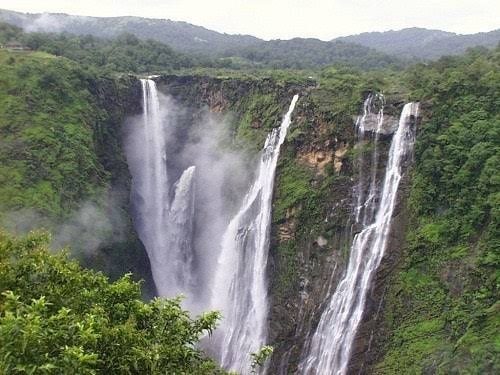 Kunchikal Falls also known as Kunchikal Abbe is situated in Mashthikatte-Hulikal border in Nidagodu village, which is the border of Shimoga-Udupi, Karnataka. The Kunchikal waterfall is formed by River Varahi and the total height of the waterfall is 455 meters (1493 feet to be accurate), as stated by the World Waterfall database.

The Kunchikal falls come under the hydroelectric projects, to generate high power of electricity. The power generated by the waterfalls goes into the Mani dum and Hulikal Power generation station, which is why the water flow to the falls, is drastically reduced.

Due to the power generation station, the water flow is reduced which makes the waterfall visible only during the rainy season, which is again the most ideal time to visit the waterfall. The scintillating view and picturesque location are exquisite when enjoyed in nature's delight. The most beautiful thing about the Kunchikal waterfall is the natural appearance of the rocks which the water cascades giving a breath-taking, mesmerising view. It's not only about the flow of water or the rocky structure but the compelling backdrop of greenery enveloping the area which makes it impossible for anyone to take their eyes off it.

The Kunchikal waterfall is said to be one of the least explored falls in the country, but the area is well maintained with the lowest littering, and the prohibition on the usage of plastic bags make the fall very little pollute. The dam prevents public to drive in the area, so traffic can be struck out from the list. The Kunchikal fall is one of those exclusive picnic spots to get away from the fast-paced life we all are living and spend some quality and time in peace, solitude and tranquillity.