Bhopal is the capital city of Madhya Pradesh in central India. Popularly known as the ‘City of Lakes’, the city of Bhopal is divided by two huge man-made lakes known as the Upper Lake and Lower Lake. Bhopal is a blend of rich history and a sprawling modern city life. The Upper Lake or the Bada Talab, the most prominent among all the lakes in the city is the oldest artificial lake in the country. It is believed to be created in 11th century AD. The Upper Lake is separated from the Lower Lake by an over bridge known as Pul Pukhta. A number of water sports activities are an added attraction to it. The beautiful Kamala Park lies in the vicinity. Van Vihar, adjacent to the Upper Lake is a National Park and Zoological Space. It is a paradise for the nature lovers.

Indira Gandhi Rashtriya Manav Sangrahalaya, situated at the Shamla Hills is the national museum of Anthropology. Bhimbetka Rock Shelters are known for housing one of the oldest rock paintings dating back to 10, 00, 00 years ago. Gohar Mahal is one of the most beautiful structures in Bhopal. It is an amalgamation of Hindu and Mughal architecture. Apart from these Bhopal has many other attractions for its tourists. Bhopal is well accessible by all three modes of transport.

Places to Visit in Bhopal 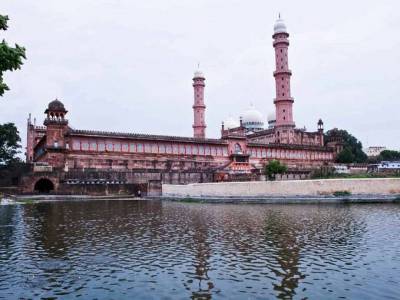 Taj-ul-masjid, in the heart of the country (Madhya Pradesh, Bhopal) is one of the world’s largest mosques. People from everywhere visit this historical establishment to get enthralled. Being located in Bhopal commutation to this place is very easy for the travellers.