Dimapur is the largest city in the north-eastern Indian state of Nagaland. It is also considered to be the ‘Gateway to Nagaland’. With glorious historical past of the local Kachari tribe and beautiful landscape, Dimapur is a popular tourist destination in the north east of India. Right on the centre of the city is the ancient ruins of the Dimasa Kachari tribe who ruled the region in the 13th century. A cluster of mushroom domed pillars built in the medieval times are an archaeological marvel attracting tourists from all over the world. Ruins of temples and other monuments are also found in various parts of the city. The Diezephe Craft Village is 13 kms from Dimapur which displays the exquisite artwork and handicrafts made out of wood, bamboo, cane works and weaving by its inhabitants. Green Park, as the name suggest is full of greenery with few water bodies offering boat rides and is a must visit in Dimapur.

Triple Falls is a beautiful cascade of three streams running down, forming a natural pool. The adjacent forested area along with the falls gives a magnificent view of the nature. The Rangapahar Reserve Forest is one of the most visited sites in Dimapur. It has a wide variety of animals and birds with numerous species of flora and fauna. The Zoological Park and Science Centre are other places to visit in Dimapur. It has well accessibility from other parts of the north east by all three modes of transport.

Places to Visit in Dimapur 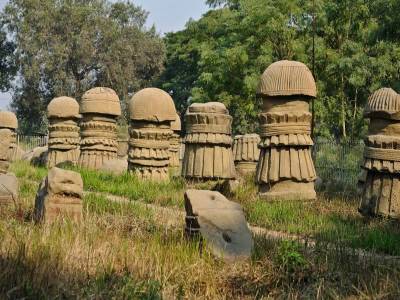 The Kachari ruins is only the attraction of Dimapur, the park contains many sculpted stones of the medieval Kachari kingdom of Assam and located in Dimapur, Nagaland.