Nalanda, founded in the 5th century is a city in Bihar and is known for being one of the world's ancient universities with Jain and Buddhist learning. According to the history Gautam Buddha and Jain Thirthankara, a Mahavira, stayed in Nalanda University to deliver lectures and spread the learnings of Buddhism and Jainism respectively. Nalanda is a part of UNESCO World Heritage Site due to its archaeological artefacts, sculptures and paintings.

Chinese pilgrim and Korean pilgrim visited Nalanda (in two different eras) to learn Buddhism and yogacharam from the masters in the monastery. To understand the traditional way of learning, these pilgrims were taught grammar, Sanskrit, logic and other learning. Traces of these learning can be found in Museums in China and Korea. The ruin of Nalanda still showcases the traces of Gupta era monasteries with traditional Indian designs on the stones (traditional Indian stone carving statues). When Nalanda was attacked by the Muslim Raids, it is said that most of the learnings were destroyed by them as they burnt the books along with the libraries in the university. It is also said that it took 6 months for the Muslim raid to burn the books present at the university.

Places to Visit in Nalanda 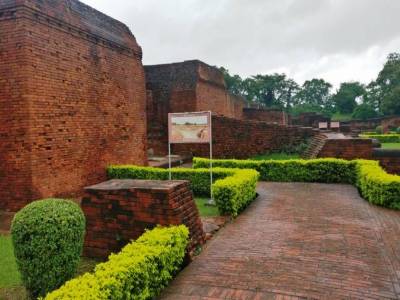 India has always been considered and revered as the land of learning, knowledge and enlightenment. Numerous ancient philosophers sought knowledge from India. It is a destination for the learners who want to know more about the ancient sciences, literature, arts or philosophy.