North 24 Parganas is a district in the state of West Bengal, India. It is located in the southern part of the state on the Ganges–Brahmaputra delta. From the bustling urban areas in the outlying of Kolkata and the areas in Salt lake and Rajarhat to the remote villages, the district has its distinct features. Ancient ruins and historical places, famous religious sites and entertainment parks all can be experienced in the tour of North 24 Parganas. The ancient archaeological site of Chandraketugarh which dates back to 3rd century B.C. situated near the village of Berachampa holds a rich historical significance. It is believed to be part of the ancient kingdom of Gangaridai mentioned in the work of the famous and renowned Greek traveler, Megasthenes.

North 24 Parganas has a lot of religious sites which are quite popular amongst the pilgrims. The famed Dakshineswar Temple on the bank of river Hoogly and the nearby Adyapith Temple is visited everyday by many devotees. Barrackpore was one of the first major military bases of the British East India Company which has also witnessed the first uprising of the 1857 revolt. Other places of interest include 500 year old Panihati Mahotsab Tala, Mulajor Kalibari, Annapurna Temple, Gandhi Ghat, Taki, Bihuiti Abhayranna, Eco Park, Mother’s Wax Museum and many more. Being very near to the capital city of Kolkata, the district is well connected by roads and railways.

Places to Visit in North 24 Parganas 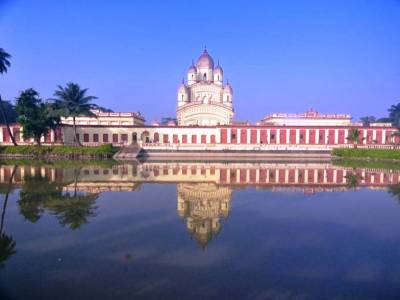 The Dakshineswar Kali temple is located on the eastern bank of Hooghly river and has a great history with huge temple complex. There is nice arrangement for holy Darshan of Maa Kali by facilitating entry to the sanctum sanctorum through multiple entry points.