Chikkamagaluru is a beautiful city located in the southern Indian state of Karnataka. Kannada is the official language of the district and so most of the people converse in the same. Chikkamagaluru is a small city of Karnataka and so the population level of the place is very low. As per the census data of the year 2011, around 1.2 lacs people reside in the city.

The Chikkamagaluru city is a favourite spot for tourists who come from all parts of the country. The city is extremely popular because of its favorable climate conditions. The climate hovers between the categories of moderate to cool and is therefore great for the travelers & tourists. It is considered as a beautiful hill station as the weather is pleasant, clear, and cool. The city also includes tropical rainforest and is home to several coffee estates.

Some of the popular locations and surrounding hill stations that are visited by tourists are Baba Budan Giri, Kudremukha, Kalasa, Sringiri, Mudigere, Mullayanagiri, etc. The temperature of the place can be as low as 11 degree Celsius during winters and as high as 32 degrees in winters. It is the pride of Karnataka, and is one of the best places too.

Places to Visit in Chikkamagaluru 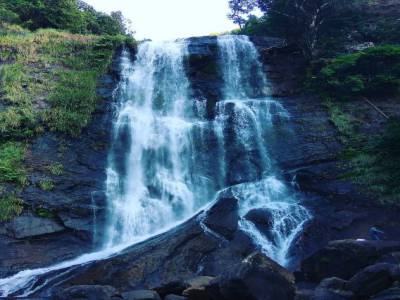 With the height of 551 ft, Hebbe falls is located in Kemmangundi, Karnataka. The waterfall is divided into two different types – Dobba Hebbe and Chikka Hebbe referring to Big Falls and Small Falls respectively; and is covered with thick forest.