The least populated district of the state of Assam is called the Dima Hasao District. Literary meaning Dimasa hills, it was previously known as the North Cachar Hills district. It has found its place among the two autonomous hill stations of Assam. Haflong is the district headquarters of Dima Hasao. Haflong is popularly known as “Switzerland of North East”. Dima Hasao is spread across an area of 4888 sq km. It is surrounded by Nagaland and Karbi Anglong, Manipur, Hojai, Meghalaya and Cachar in the North East, East, North, West and South respectively. The district is a living example of cultural amalgamation and natural scenic beauty. Tourists are definite to thoroughly enjoy the waterfalls, rivers, hills and cultural destinations. Tourism is an USP of the district.

Haflong is truly an intricately designed by mother earth with numerous natural lakes, historic bungalows built by the Britishers, temples and splendid churches. Tourists interested in watching birds could pay a visit to Jatinga. Maibong, in the banks of River Mahur, still witness various historical constructions. Harangajao, Umrangso, Thuruk, Hajong, Panimoor and Laisong are the popular tourist destinations. Tourists are sure to have a great time in the diverse yet sense captivating aura of the place.

Places to Visit in Dima Hasao 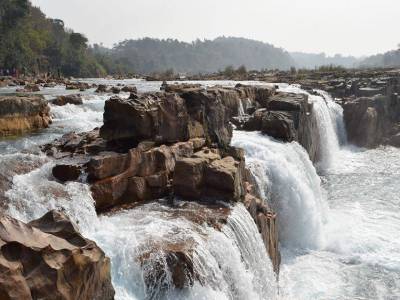 Niagara isn’t the only waterfall that is one of a kind. In Assam, in the city of Dima Hasao, lies a piece that is unexplored by most people known as the Panimur Falls. The waterfall falls from a great height and has enough water that it looks like a thin milkshake at the water ....