Jhansi is a city in the south of Uttar Pradesh, India. This city is well known because of its history and the name Rani Lakshmi Bai. Rani Lakshmi Bai was the queen of Jhansi before getting killed by the Britishers over the ruling of Jhansi. She is also known as 'India's Joan of Arc' for her bravery against the Britishers after her husband passed away. This is why, the city celebrates a weekend-long event, known as Jhansi Mahotsav. Music, dance and other performances are organised during this event, showcasing the rich culture of Bundelkhand. This event invites people from across the country to come and visit the heritage sites of the city like traditional handicraft fairs, archaeological museum and food festival, ending the event with competitions of the local culture. The Fort of Jhansi is still open for visitors to view the entire city (as the fort is located on the top of a mountain).

Another exhibition conduct in the city is State vegetable and flowers exhibition. Every year, in the month of February, the state government invites farmers to exhibit their vegetables, fruits, flowers and other agricultural products in the competition. Barua Sagar, Rani Mahal and St. Judes Shrine are other tourist attraction sites in the city which should not be missed.

Places to Visit in Jhansi 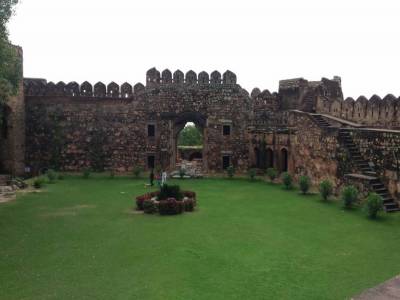 The Jhansi has a long history but most famous for its brave queen Rani Laximibai. The Jhansi Fort is a historical fort built in 1613 by Raja Bir Singh Deo. The Jhansi fort is in good condition and still has operational Mahadev temple and Ganapati temple (where Rani Laximibai her....