According to the historical evidences, the establishment of the Mokokchung Township in the hill dates back to an early period of 19th century CE. This was initially a British army camp in the eastern part of their Colonial Indian territory. It was here only that the Assam Rifles set up their outpost near the DC hills. After the complete securing of the zone and fortifying the defences, the British administration shifted the township to the Naga Hills and thus came into being the modern day urban settlement, Mokokchung. Mokokchung is predominantly the settlement sector of the AO community. AOs are the first Naga people who accept the Christian Religion on its arrival to India by the Britishers during the 9ths century AD. From the very start of the establishment, the AOs are present in Mokokchung. Furthermore, the 1970s revivalist movement that soared across the state of Nagaland started in the AO centre, Mokokchung.

The township of Mokokchung on the Naga Hills is at an elevation of about 1375 meters above sea level that makes the temperature of the land very temperate and ideal for the economical & political urbanization of the town. Being the centre of AO community, it is observed that the number of luminaries produced from this district is very much higher than other, thus the name land of pioneers. Being a Christian town the festivals like Christmas, Easter, Moatsu and New Year are celebrated extravagantly. Mokokchung is one of the most attractive tourist destinations in Nagaland.

Places to Visit in Mokokchung 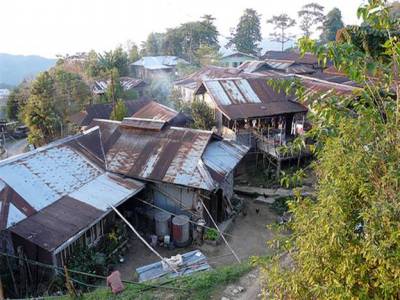 Ungma is a very old and the second largest village in Nagaland of AO tribes, located in Mokokchung district of Nagaland, India.