Located at a distance of 10 km from the ‘City Beautiful’, Chandigarh, lies the exquisite city of Panchkula. The name depicts that the city channels five water canals and is responsible for water supply all over Haryana. Tourists flock this place due to the mild weather conditions. It is known to have the densest forest reserves in Haryana. Some of the awesome places that you can visit while in the city are, the Cactus Garden which is known to have a variety of beautiful and green Cactus plants, Pinjore which is famous due to its ancient culture and history, Chattbir Zoo which is known to be the one of the largest reserves for animals in North India, Mansa Devi Temple which is a place of worship for the king of Panchkula.

Apart from the attractive places that the city of the five canals has, it is also a major place where people begin their journey to the magnificent city of Himachal Pradesh. You can book a train from Delhi or even a bus. Express train takes around 5 hours to reach the destination whereas taking the road may take you up to 6-7 hours to reach Panchkula, considering a low traffic scenario.

Places to Visit in Panchkula 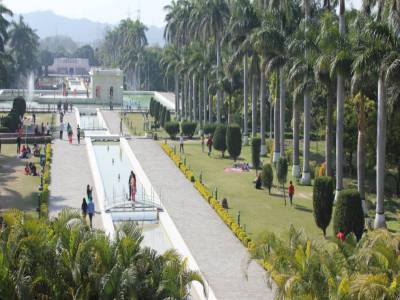 Being a burning instance of Mughal Gardens architectural style, Pinjore Gardens in Haryana is a must visit place in Haryana. The architecture of the garden has been designed in seven terraces. The garden covers a total area of 100 acres.