Rajnandgao is a district in Chattisgarh, a state in Eastern India. The city of Rajnandgao is the district headquarters. The place has a long historical background from being under various rulers at different period of time. Ancient temples, natural caves and lakes, historical palaces and museums, make Rajnandgao a notable tourist destination in India.

The ancient Shiva temples at Gandai and Ghatiyari built around 11th–13th century are significant sites from the archaeological point of view. The natural caves and water resources at Mandeep Khol at Thakutola and Ambagarh Chowki are some of the places which are also visited by many. The Barfani Dham is a prominent religious site in Rajnandgao town. The huge Shiva Linga on the outer part of the temple and the inner shrine of the Patal Bhairavi and Navadurga is crowded by many devotees every day. Bamleshwari temple located at a high hilltop at Dongargarh is a popular pilgrim destination in the Rajnandgao district. The picturesque view of the mountain and pond in the surroundings is an added attraction. Khara Reserve Forest, Kharkhara Dam and Mangata Wildlife Park are other tourist attractions in this district. Ranjnandgao is well connected by roads and railways with all major cities of the state and the neighbouring ones. The nearest airport is at the state capital, Raipur.

Places to Visit in Rajnandgaon 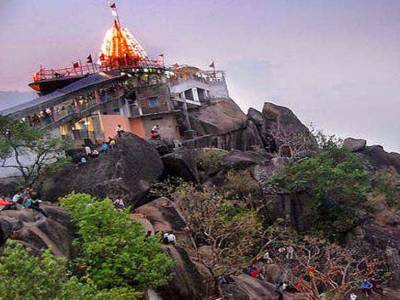 Bamleshwari Temple is situated in Dongargarh in the Rajnandgaon district in the Indian state of Chhattisgarh. It is an extremely revered place of worship dedicated to Goddess Bamleshwari and well connected by transport from the main towns of Durg & Bhillai.