Rajsamand District is a district in Rajasthan which is known for being the first district to build an artificial lake in 17th century. The artificial lake was being built by the then King of Mewar, Rana Raj Singh. Dewair Fort is the place where Maharna Pratap was crowned and the victotry memorial of Maharana Pratap was also built in Dewair in 2012. Kumbhalgarh Fort, being the birthplace of Maharana Pratap, is the second most important Fort in the Aravali ranges, after the Chittorgarh Fort. The fort was built with great architecture which allows the people in the fort to view the entire district, and during wars, the Seven Gates used to be helpful. The wall of Kumbhalgarh Fort is also considered as the second 'Great Wall of China'. There are more than 360 temples within the fort out of which the most famous temple is the Shiva temple (famous for shivalinga).

Rajsamand is the district headquarters. Mewar is known for its historical wars and the bravery they showed during the war times. The lake and other sculptures were built in pure marble and even in the current era, Rajasamand is also well known for producing the highest percentile of marble production across the country.

Places to Visit in Rajsamand 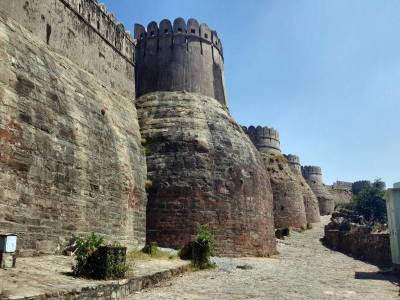 The forts in Rajasthan, the group of forts built on the Aravalli Mountain Range are collectively renamed as the Hill Forts of Rajasthan by UNESCO. The part of Aravalli near the city of Udaipur is mostly populated with many forts.