South 24 Parganas is a district in West Bengal in eastern India. The district stretches from the southern urban outskirts of the capital city of Kolkata to the low lying plains full of mangroves. The famous Sudarbans enlisted in the UNESCO World Heritage site is situated in this district. This marshy dense mangrove forest was declared as a Tiger Reserve and is home to Royal Bengal Tigers, barking deer, fishing cats, estuarine crocodiles, olive ridley turtles, gangetic dolphins and many more. It is only accessible by waterways and there are multiple watch tower placed for viewing wildlife. Apart from the Reserve Forest one can also visit the Lothian Island Wildlife Sanctuary, Bhagabatpur Crocodile Project and Kalashdeep in Sundarban.

Falta on the bank of river Hooghly not only has a beautiful riverside beauty but also has historical and economic significance. On the estuary of the river Ganges in the Ganges delta lays the beautiful island of Gangasagar or the Sagar Island. The charming splendour of the place attracts both adventure lovers and pilgrims. It is one of the most sacred pilgrimage sites of the Hindus. The Kapil Muni Temple on this island is also considered to be a sacred place. The serene sea beach at Bakkhali and Diamond Harbour are attractive tourist destination. South 24 Parganas is well connected by roads and local train with Kolkata.

Places to Visit in South 24 Parganas 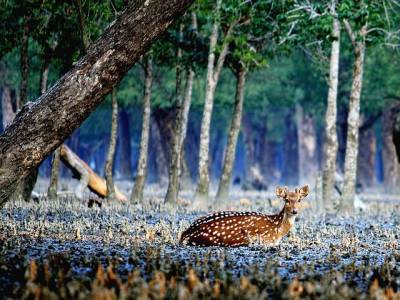