Udupi, a district in Karnataka; India is also known as temple city as two of the major temples in the state are present here in the city. Sri Krishna Temple is one of the main attractions in the city. This temple was built in the 13th century by Madhvacharya. The temple was built according to the architecture of Kerala temples. Another temple which is famous in the city is Annegudde Vinayaka Temple.

Udupi is also known for its Volcanic Rock in St. Mary's Island. This place is also considered as the birthplace of Madhvacharya and there is a memorial dedicated to him. The memorial has a pond which is considered as a holy place which helps one to cleanse his sins. There is a temple in this island dedicated to goddess Durga. According to history, when Vasco Da Gama was exploring the islands and countries he landed on the island and claimed it in the name of Mother Mary, hence the name St. Mary Island. Kapu beach and Malpe beach are also famous in the city. Kapu beach is known for its lighthouse facing a scenic view of the beach and Malpe beach is known for clicking amazing sunset pictures.

Places to Visit in Udupi 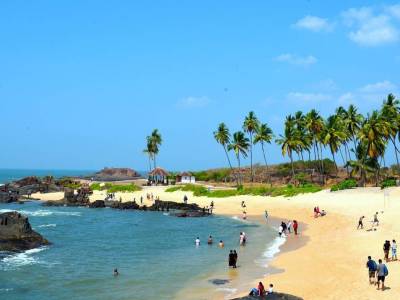 St. Mary's Islands is a small beautiful island, popularly known as Coconut Island and a set of four small islands in the Arabian Sea off the coast of Malpe, Udupi, Karnataka, India. The St. Mary's Islands can be reached by a ferry from the Malpe beach.