Amreli is a city located in Gujarat, a state in India. This city is known for depicting the ancient history of the Gujarati culture and is very famous amongst tourists and archaeologists. This city has had multiple names as years went by. It was earlier known as Anumanji, Amlik and lastly as Amravati.

Amreli is one of the ancient cities in Gujarat where the culture of the state can be studied with the help of the structures, memorials, and statues present in the city. Some structures were found at the bank of the rivers Thebi and Vari. It includes two temples - Kamnath and Trimbaknath, which are the oldest temples in the city or district. There are two forts in the city where the main fort was used for the royal residence and the old fort was known as Juna Kota. Juna Kota was used as a jail in the town.

Juna Masjid is one of the oldest masjids in the district where people still come for prayers. The city has been modernized over the years and has been converted into a famous tourist destination site with ancient structures, sanctuaries, museums and more; where the tourists will be able to experience the pure Gujarati culture.

Places to Visit in Amreli 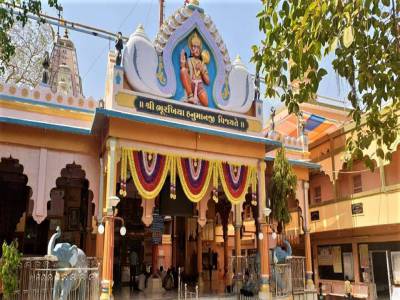 Shri Bhurakhiya Hanumanji Temple is one of the most important temples for the local people of the Lathi village due to the myth associated with it.