Chitradurga district is located in the state of Karnataka in South India. The district headquarters lies in the city of Chitradurga. The place gets its name from the umbrella shaped hill named Chitrakaldurga. The district is an amalgamation of mythological legends, history of thousand year old human settlements, ancient religious and cultural sites along with the touch of modernisation. This region was under the rule of almost every major dynasty who ruled the southern part of India.

The fort of Chitradurga is the most important tourist attraction in this district. It is a ‘Giridurg’ or hill fort with 7 ramparts. Epigraphs of Chalukyas kings and Hoysalas are found inside the fort. This fort was suitably built for the contemporary war techniques. The fort has 14 temples and other tourists’ interest like Onakekindi, Murugamata, gymnasium, remnants of the royal palace, granary and oil tanks, watch towers, military quarters, gun holes, etc. The entire surroundings of the fort have an astonishing view. Vani Vilasa Sagara Dam is another major tourist destination in the Chitradurga district. The dam is built on the Vedavathi River. Chitradurga is well accessible by roads and railways and is one such district that commands a must-visit status for sure.

Places to Visit in Chitradurga 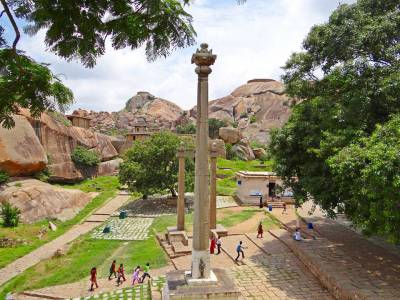 Chitradurga Fort or Chitaldoorg as it was called by the Britishers is a fort located in the Chitradurga District of Karnataka and is built between 11th and 13th century, the place is home to different monuments worth visiting.