The district of Narmada in Gujarat is one of the least populated regions in the south eastern frontier of the state on the border of Maharashtra. The district derives its name from Narmada River, one of the principal west flowing rivers of Central India. Narmada district is in the neighborhood of Vadodara, Tapti and Bharuch districts. The capital city of Narmada is Rajpipla, which was the former royal kingdom of Nandipuri under the rule of Gurjara Kings. The variant historical and natural significance scattered all over the Narmada district makes it such a diversified tourism destination which allures the visitors to the fairy old state of Gujarat.

The Satpura mountain rage, the caressing Narmada River and the forest cover gives the district a defining scenic beauty. There are lots of places to visit in Narmada. Some of the best natural wonders here are the majestic Ninai Waterfall & Zarvani Waterfall in the wilderness. The temples in Narmada are quite enriched culturally & spiritually. These are Harsiddhi Mataji, Devmogara and Nilkanth Dham Poicha temples. Junaraj & Rajavant Palace are of historic significance. But the architectural marvels of Sardar Sarovar Dam, the Karjan Dam and the Stature of Unity (world tallest statue dedicated to Sardar Vallav Bhai Patel) are simply astounding.

Places to Visit in Narmada 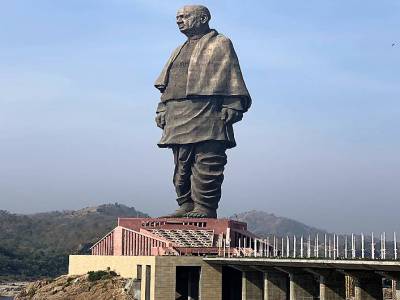 Designed after the Iron Man of India, the Statue of Unity pays tribute to the Sardar Vallabhbhai Patel who was the first Home Minister of India. He was highly respected for the leadership and management. The skill work of Indian engineers who have been behind the scenes and helpe....