Formed in the year 1998, Serchhip district is known to be the smallest district of Mizoram. It is placed in the central part of the state. The Serchhip district is well known for being the district, among all districts of India, with the highest literacy rate. It is spread over an area of 1421 sq km housing 64937 people. Serchhip is surrounded by Champhai District, Aizawal and Lunglei district in the east, north and south respectively. The district has 5 main rivers flowing through it namely Mat, Tuikum, Tuichang, Lau and Tlawng. These water bodies originate in the southern part of the district and makes way to the north.

The district is also substantially covered by forest area of about 91235 hectare with majority of the forest being open forest and a considerable small part being dense forest. The cultural heritage and natural beauty alliterates to give rise to a splendid tourism gift to the nature lovers. Two celebrated villages of the district are Neiloh and Buangpuri. These are one of the top attractions for the tourists. Wide fields with lustre green coverage make the place adorable. Breadth taking waterfalls is definite to create an unforgettable experience for the visitors. The Vantawng Waterfall, Chhingpuii Thlan, Thenzawal and Paragliding are the top tourist attractions of Serchhip.

Places to Visit in Serchhip 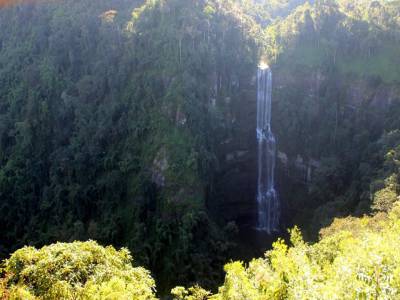 Vantawng Fall is the highest waterfall in Mizoram, India. The spectacular view of the waterfall amidst the green lush hilly surrounding makes it a sought after destination in Mizoram. It can only be viewed from a distance as it is quite hard to get near to due to the hilly terrai....